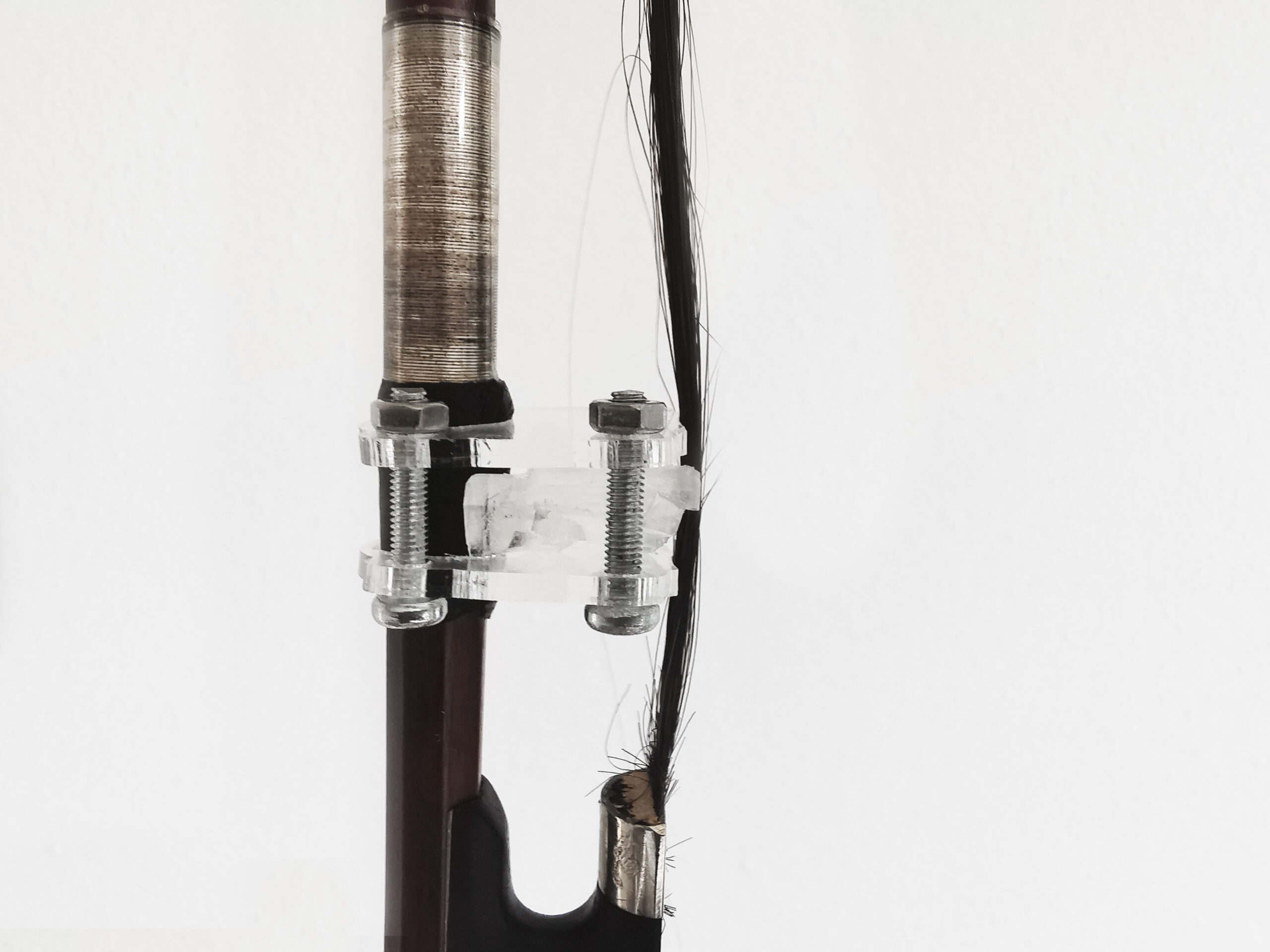 Serpent and Lily is a violin bow out of human hair that studies the socio-historical and cultural symbols around hair, life and death, and the innocent’s right to life. The project began with my interest in studying my autobiography, and some incidents that occurred during the Turkish invasion at the Republic of Cyprus in 1974. Through this work, I mediate the perpetual consequences in young people’s perception related to the right to control their body.

In this work, I visit Judith Thomson’s essay “A Defense of Abortion” who writes about “the violinist”. A thought experiment that argues about the fetus’ right to life and the woman’s right to terminate her pregnancy, to take control of her own body. The thought experiment places oneself to a moral dilemma and asks them to decide between their body and someone else’s life in a similar way to terrain invasion, sexual penetration and consent, rape, and the loss of innocent lives.

During the Turkish invasion of the Republic of Cyprus in 1974, women, young girls, mothers and grandmothers were repeatedly sexually desecrated, raped. Due to the large number of abuses, the government made an amendment to the law on the right of women to abort in case of rape. Although since 1974 the woman’s right to control her body is legal, in reality, rape remains a current issue, as it continues to desecrate lives.

To find justice in court for such matters, is still a complicated issue.  The victim must undergo a formal procedure that includes complaint, medical examination, testimonies, and other legal procedures that do not necessarily bring justice to the emotional and the physical violence he or she has suffered from. Rape victims are often unable to expose themselves in such emotional procedures due to the distress they experience, and justice never takes place.

Serpent and Lily, uses hair and the violin bow to ask one to question and to reflect the control of the body within their socio-cultural existence.  One can often see that hair symbolisms signal the ways in which the body behaves and communicates in the socio-cultural context and the economic structures, in a similar way than language does. Hair care creates not only the social image, but also identity, sexuality, religion, gender, age, and political stance.  The change in appearance, can also indicate psychological states.  For example, one can often see women with depression shave their hair which can indicate their withdrawal from society, themselves, their sexuality, and their desire for life.  In a similar manner, a person who has been sexually abused cuts their hair as a sign of withdrawing from their sexuality, innocence, vitality and desire for life.  The cutting of hair, often communicates alienation from society, loss, mourning, permanent change, the need for memory loss, and death in a person’s auto-history.

Through this work, I am interested to surround the emotional burden of these issues through the historical events of my home country, sexuality and consent, territorial but also boidyl invasion, violence, fragility, and the right to have control over the body.  In short, Serpent and Lily, converts into a symbol, a sound jewellery that resists, undergoes, wears out and records these events, to consequently set a perpetual paradox.

Copyright © 2018 by Nicolina Stylianou. All rights reserved. Reproduction in whole or in part, by any means, without written permission is prohibited.